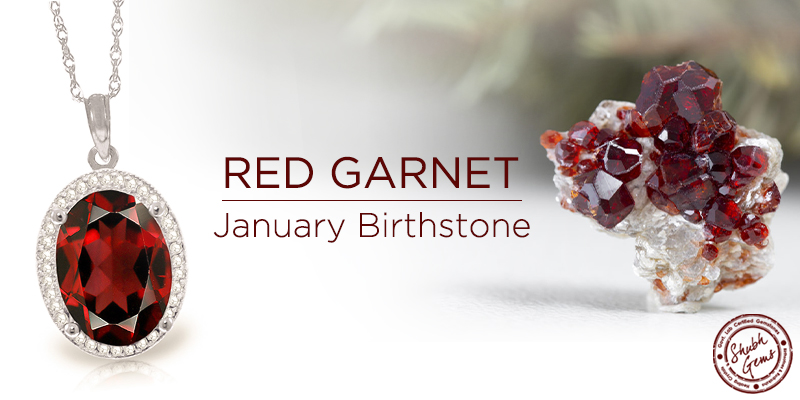 Birthstones have their roots in ancient astrology. Birthstones are gemstones that are associated with the month of one’s birth based on the planetary positions. Wearing your birthstone brings you good luck, good health, and protection. Each of the 12 months of the calendar has a unique birthstone and each stone has a unique meaning and significance.

The month of January marks a time for new beginnings. For those born in the month of January, your new year follows the same path as nature and there is some wonderful karma in that. One way to reap the benefits of that karma is by wearing your traditional birthstone.

Bringing the flicker of fire and passion to the cold winter month and the turn of the calendar, the January birthstone is the beautiful and bright Red Garnet. This gemstone represents passion, loyalty, friendship, love, strong feelings and emotions.

Red Garnet is a light bringer and an illuminator meaning that with this stone close at hand you will always be protected and you will always find a way. It will warm your soul, bring a renewed sense of vitality, and keep you in full and healthy spirits.

Read on to find out more about this amazing January Birthstone.

Red Garnet is the most sought after variety of Garnet mineral family. Garnet is the name of a gemstone family which comprises of several types of garnets having a wide range of colours. All Garnets have essentially the same crystal structure, but they vary in chemical composition.

Red Garnet is the pomegranate of the precious gem world. It is called so because a cluster of red garnet crystals resemble the red seeds inside a pomegranate.

Red Garnet has a sparkle which is so intense and captivating that it is referred to as ‘fire’ by gemologists. It has an incredibly dark red luster that instantly stirs the soul.

Garnet is a very durable gemstone and ranks between 6.5-7.5 on the Mohs scale of hardness. The stone is so durable that remnants of Red Garnet jewellery have been found dating as far back as the Bronze Age.

Red Garnets are found all over the world, with deposits on almost each continent. The stones mined in Brazil, India and Africa are very popular and of fine-quality.

Red Garnet is a strong protection stone surrounded with folklore. It has a rich history and an abundance of benefits.

Red Garnet is found in beautiful shades of reds ranging from deep translucent red very deep almost blackish-red. Some stones can also have a hint of orange, pink, grey, brown and violet.

Pyrope (primarily red) and Almandine (dark red to black-red) are the main varieties of Red Garnets. Other than these there are red Spessartine (orange to orange-red) and red Rhodolite (pink to purplish red) but they are very rare as other colours tend to be dominant in these varieties.

Pyrope Garnet is the most popular of the red varieties as it has the desired rich red pomegranate colour. It is the only member of the garnet family to always display red colouration in natural samples. Its chemical composition is of a magnesium aluminium silicate.

Almandine Garnet is another species of red garnet that is almost almost invariably dark in colour and dressed in earthly shades. It comes in shades ranging from range in colour from dark red to reddish-brown to blackish-red. Its chemical composition is of an iron aluminium silicate.

But all Garnets are hybrids of various Garnet species as the chemistry of different Garnet species mix and blend while they are being geologically formed. Thus pure Almandines and Pyropes are not known to exist in nature. Almandines generally contain significant amounts of Pyrope and vice- versa.

This sparkling red gem is a legendary precious stone. It was held in the highest esteem thousands of years ago.

The clergy and nobility of the the middle ages clearly had a preference for Red Garnet stones. Archaeologists have discovered garnet amulets in the tombs of pharaohs in Egypt. The gemstone was widely popular in Europe during the Victorian times. It was typical for noble patriarchs to have carved signet rings made from Red Garnet in Rome. The Smithsonian’s antique pyrope hair comb is one of the most famous pieces of garnet jewellery.

According to biblical legend, Red Garnet was said to be the only source of light (thereby hope) on Noah’s Ark. In ancient Rome, people believed Red Garnet was a talisman for travellers (if it sparkled, it meant danger was near). It was also used for protection by ancient Roamn warriors going into battle. Native American healers thought Red Garnet had the ability to protect them against injury and poison. In ancient Egypt, Red Garnet was used to ward off bad dreams and cure depression.

Red Garnet is associated with the base, sacral, solar plexus and heart chakras and is capable of clearing and realigning all these chakras. Working closely with the grounding chakras, Red Garnet keeps you safe and steady on your feet making it less likely for you to slip into traps of self-doubt and jealousy and allowing you to make choices that are connected with your authentic well-being.

Red Garnet is known for rousing passion and bringing a sweet sense of hope. This stone eliminates negative energies and instills self-confidence to the wearer. It provides a peace of mind which brings mental clarity and promotes creativity thinking. It is a vital ingredient in Chinese medicine when it comes to getting your chi flowing.

Radiating with warmth and the colour of rich blood, Red Garnet is an excellent gemstone for regulating the blood circulatory system, strengthening the heart and flushing out toxins. It increases your metabolism and boosts your immunity by helping your body absorb the much-needed nutrients.

Red Garnet has a strong stimulating effect. Since ancient times, Red Garnet has been used as a remedy for inflammatory diseases and soothing the angry heart. Red Garnet has the power to cure diseases related to spine, lungs and digestion. This glowing gemstone also helps in improving the sex drive, potency, vigour and reproductive health of its wearer.

Wearing Red Garnet can also bring the wearer fame, fortune and riches. It drastically improves the wearer’s personality and enhances their leadership qualities. It is highly beneficial for businessmen, doctors and politicians.

Whether seeking a little pick me up, looking for some deep chakra healing, or wanting to tap into those laws of attraction, Red Garnet is ever ready to illuminate the way. This gleaming red gem brings vitality to the table, inviting you to always feel the glow of your inner warmth no matter what is going on around you. It is a beautiful gemstone to start the year with.