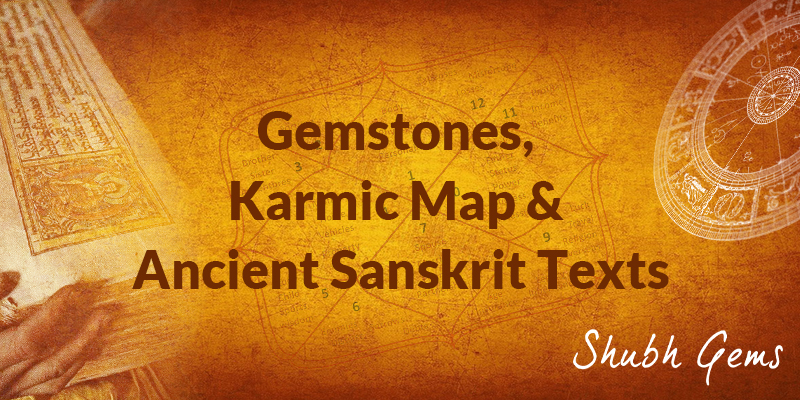 Gems have exceptional energies that can combat negative factors of a person’s karmic map.

It is the absolute truth; stated in various sacred ancient scriptures such as the Vedas, Puranas and other Sanskrit texts.

We are living on a small planet that is gravitating through space at this very moment. We are surrounded by billions of celestial bodies such as the moon, sun, other planets and stars.

Given below is an extract from Chapter 104 of the Brihat Samhita which is one of the fundamental works of ancient Indian astronomy written by Varahamihira in the 6th century A.D.

It translates as: The position of planets and their movement through the signs of the Zodiac has an influence over various human affairs. The effect of each planet is different for different signs.

The above fact is also mentioned in other ancient texts in different words and languages. This is the basis of Vedic Astrology which is considered by many to be the eye of the Vedas, because it is meant to provide guidance to individuals who feel lost or confused on their life’s journey.

When the Grahas are active in their Daśās or periodicities, they are particularly empowered to direct the affairs of the person. Even otherwise, Grahas are always busy capturing us in some way or other, for better or for worse. There are six pathways to alter a negative karmic life map: Mantra, Tantra, Yantra, Aushadha, Yagna and Ratna (gemstones). Out of these, the latter i.e. ratna is the simplest way of begetting qualitative life changes.

Various sacred Indian Sanskrit texts mention the benefits of gemstones and how they can affect a person’s life. Given below are a few extracts mentioning the same:

This extract from Atharva Veda Khand 19 Sukt 6 says that ‘Gemstones are auspicious and have multifarious vital powers that are helpful in various phases of life. They are full of energy, endowed with radiance, have powerful effects, and bring sweet results.’

This extract from Garuda Purana Achara Khand Chapter 68 says that ‘Gemstones have the power to absolve one of all sins and work as a counteract against poison, snake bites, diseases and other dangers.’

This extract from Brihat Samhita Chapter 80 says that ‘A person’s fortune is connected with the gemstones he possesses. A natural stone can bring you prosperity while a used treated stone can bring misery.’

Gemstones are divided into three categories i.e. gems of heaven, gems of hell and gems of Earth. There are many gemstones of the Earth mentioned in different ancient texts along with their origin, benefits, characteristics, testing methods and price evaluation methods. But there are nine stones which are associated with the nine grahas that are the most powerful and vital.

The above quote is from Chapter 2 of ancient Jataka Parijata compiled by Sri Vaidyanatha Dikshitar in the 15th century and it translates as:

Ruby is the gem of the Lord of the Sun

Pearl is the gemstone of the Cool Moon

Red Coral is the gem of Mars

Emerald is the gemstone of Mercury

Yellow Sapphire is the gem of Jupiter

Diamond is the gem of Venus

Blue Sapphire is the gem of Saturn

These nine gemstones are called the navratnas and they have been widely used since ancient times. According to Vedic Astrology, they not only to counteract the planetary imbalances but also to increase the benefits of the auspicious grahas.

In conclusion, We at Shubh Gems would say what has already been said thousands of years ago in ArtharvaVeda Khand 19 Sukt 46 Mantra 1;

Gemstones have invincible power that can be used to attain might and vigour. They can bring you long life, splendour, energy and strength. You should let these stones guide and protect you in life.